The Mystery of the Manor 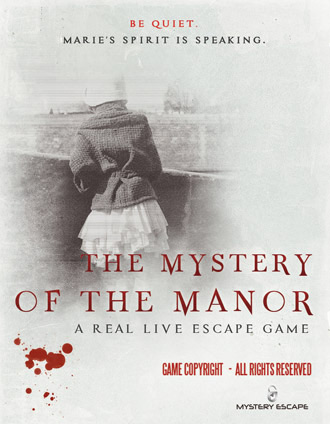 A young and wealthy aristocrat, Marie de Meauconduits, was murdered in her Manor at the beginning of the 20th century. No murder weapon, murderer or motive were ever discovered, however her spirit still remains imprisoned in this same room.

Your team must investigate further this troubling room to discover a way to set the young girl’s spirit free. By freeing her soul, you will in exchange, get your own freedom back.

Mystery Escape Barcelona: The most innovative and entertaining scape room across Europe, it’s now in Barcelona. Be part of an adventure from another century through a magical time journey of joy. You will become a masterful detective, uncovering mysteries and solving enigmas to reach your goal: release Marie de Meauconduits’ soul and get out of the room.

3 identical rooms for up to 21 players simultaneously